The “fifth of four” kids born in Dallas, Texas to an ex-Army paratrooper father who blew out his eardrums during the Korean War and an opera singer mother with an excruciatingly accurate sense of pitch, singer-songwriter and multi-instrumentalist Liam Gowing definitely took after the latter parent when it came to making music. After teaching himself to play piano and guitar by ear at the age of 10, the precocious youngster started a cover band in the seventh grade with childhood friend Bob Musso, recorded a group album of original songs at the age of 17, and composed a rock opera before graduating high school.

Passing up an opportunity to attend Stanford University on scholarship, Gowing enrolled at UCLA partly to be closer to the record labels and recording studios of Los Angeles, where he would gig occasionally with college bandmates, Matt Kropp and Chris Varosy. Upon graduating magna cum laude, he next weighed an invitation to attend the Top-5 University of Chicago Law School but instead decided to backpack around the world with his trusty $100 Epiphone acoustic. Inspired to write a slew of new songs after meeting the Dalai Lama and seeing Mount Everest on the trip, Gowing returned to LA determined to land a record deal. To that end, he began recording a 4-song demo ironically entitled “The Best Thing that Never Happened to Me.”

The weekend he finished the project, however, he received the news that his mother had just been diagnosed with inoperable pancreatic cancer. Thoroughly dejected, Gowing found shopping the demo during her 6-month illness to be a fool’s errand. And after another year or so of half-hearted solo acoustic shows followed by a stint as lead guitarist in a friend‘s “progadelic” jam band, he virtually hung up his guitar and concentrated instead on a burgeoning career in journalism. Writing variously for the LA Weekly, Filter, Paste, the N.M.E. and SPIN Magazine, which nominated his lengthy expose on the death of Elliott Smith for a 2005 ASME “Ellie” Award in Best Profile Writing, Gowing eventually became a city editor for the A.V. Club and thereafter a staff writer at the Los Angeles Times where he penned the notable recreation-and-adventure column, “Action Man,” and finally co-wrote and shopped a feature film script about one of the installments.

In 2011, however, a chance encounter with fellow Bruin Jerry “Mr.” Pao, a turntablist in the hip-hop group 1000 Clowns, provided Gowing with an impetus to make music again. Pao, who needed “a place to crash” for a few months, offered to engineer a series of recording sessions in lieu of paying rent. Smitten, Gowing took the bait and after borrowing a bass and purloining a drum kit to complete his ramshackle “Purdizzy” home studio, became his own one-man-band. With Pao patiently overseeing the proceedings, Gowing painstakingly overdubbed guitar, bass, drums, piano, harmonica, tambourine, recorder and castanets, plus—through the magic of a MIDI keyboard—synth, organ, Rhodes, glockenspiel, steelpan, woodwinds, strings and horns to create the backing tracks to 10 new songs. After adding both lead and three- and four-part harmony vocals, Gowing collected the results in 2013 and issued them in the form of his debut solo album, Drunk Sluts Forever, mixed by yet another UCLA alumnus, guitarist Bill O’Neil.

With O’Neil’s help, Gowing put together a backing band committed to playing a handful of live shows in advance of the album release party, which was a pleasant success. And yet, although the album garnered some positive reviews, culminating in KCSN program director Marc “Mookie” Kaczor declaring it to be “an instant indie rock classic,” Gowing’s efforts were hardly remunerative. With various DJs citing the “offensive” name of the album—undoubtedly unaware that the title track was a tongue-in-cheek tribute to a female friend who designed a line of T-shirts by the same name—Gowing’s efforts to expand the reach of the music via radio promotion fell flat. And unable to bankroll a longer-term supporting band on tour, he returned to freelance writing and began teaching the LSAT.

Inspired by another female friend, Kim Huynh—a practicing Buddhist who, after declaring 2017 to be the year of her [metaphysical] death, decided to accomplish everything on her bucket list then and there—Gowing subsequently decided he needed to record the songs he’d written in the late 90s and early aughts in the aftermath of his mother’s death and the tragic suicide of his roommate, Josh McGinn. Doubling down on the concept, he decided to make it a double album with a second collection of more recent and “less haunted” material—all the best songs he hadn’t yet recorded. And thus, Mother Lode was born.

Envisioning a number of epic productions with yet more strings, horns and “little symphonic movements” in some of the tracks, Gowing recognized that he needed to maroon himself somewhere remote, while taking a solemn vow not to return home until the project was complete. Impressed by his friend Liam Litchfield’s adventures teaching English in Beijing, he decided to move to Shanghai, China in the fall of 2017 to teach English Lit at “the MIT of the East,” Shanghai Jiao Tong University. Devoting his summer and winter breaks to arranging and recording over the following five years, Gowing completed 27 tracks in all. And returning to the USA in the summer of 2022, he asked a close friend who was uniquely qualified–Jon Griffin of LunaZen Studios–to mix 24 of the songs for inclusion on the release.

Out on Gowing’s own imprint MojoSon Music, Mother Lode will be released through CDBaby — with digital distribution to iTunes, Amazon Music, Spotify, Napster and more — on November 15, 2022. 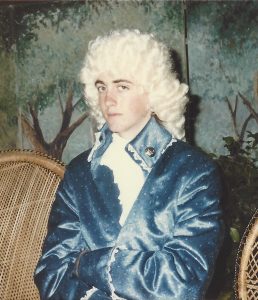 *Raised Catholic, Gowing chose Amadeus as his confirmation name. Yes, he was a “unique” child.